The company was formed in 1952 by Jim Hogarth who provided pharmaceutical and photographic services from the premises at 514 Crow Road Jordanhill. Later in the 1950s he opened a second pharmacy at 342 Crow Road, Broomhill.

The premises at 308 Crow Road had been a pharmacy for over 50 years at that time and were owned by William McMaster. 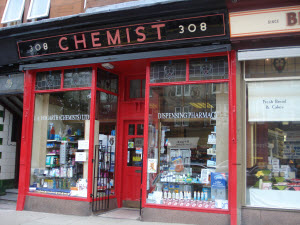 Sadly in the 1960s Mr McMaster died and Jim Hogarth bought the pharmacy from Mrs McMaster and closed the branch at 342 Crow Road.

Jim Hogarth died in 1977 and a few years later the directors took the decision to close the pharmacy at 514 Crow Road and concentrate the service from 308 Crow Road.

Sam Gibson was superintendent pharmacist director until 1999 when he retired.

Robin Hogarth became managing director at that time and is now supported by Mhairi Speirs (his niece).

Mhairi is an independent prescriber and has a diploma in travel medicine from the Royal College of Physicians and Surgeons.

She set up a travel clinic at 308 Crow Road in 2010 and is able to advise on travel medicines, prescribe and administer vaccines to travellers.
The premises are also a designated Yellow Fever Centre issuing the necessary certificate.

Robin and Mhairi are assisted by Fiona Fleming who is a relief pharmacist and has been with the company for over 10 years.

This website provides information, not medical advice. The information must never be used as an alternative to, or replacement for, advice given by a qualified medical professional.This website is powered by 2MLPharmacare a trading division of 2ML Limited.
Navigation Content
Twoml important link

We use cookies to ensure that we give you the best experience on our website. This includes cookies from third party websites where third party content is embedded in a page which you may visit. By continuing to use this website, you agree to their use.